How to use the Buffer Lookup step

The Buffer Lookup step is used when you want to reference data that is stored in a buffer.

Illustrated below is an example of a flow where a Record Generator is used as the source step and the Buffer Lookup step is used to reference the data that is in the the Record Generator step.

The below page is an example of the data that is stored in the buffer.

The below image consists of partial data that is stored in a buffer and one field is referenced in the Record Generator source step. 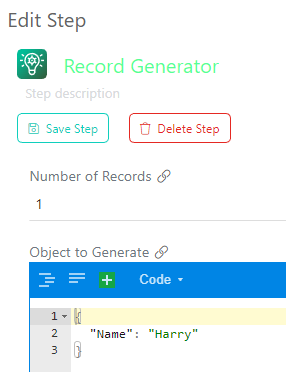 The below image is the Buffer Lookup step. The buffer “Test” is being selected from the dropdown list (down arrow located on the far right on the Buffer ID field). Query is selected as the Lookup Type. In the Query Lookup, the field on the left ( “FirstName” ) refers to the field that is in the buffer. The equal to ( = ) operator is selected and on the right field, @record.Name is used to reference the field that is in the current dataset in the flow.

Scroll to the bottom of the Buffer Lookup step to view the Mappings section. Add a field by clicking on the highlighted icon and populate the To Field with a field name (eg. BufferLookup in this example) as shown in the below image.

NB: All lookup steps have to be mapped to a new field to reference the required data in a new object.

Illustrated below is the output results where the source data is returned with the created “BufferLookup” object that references the data from the buffer. 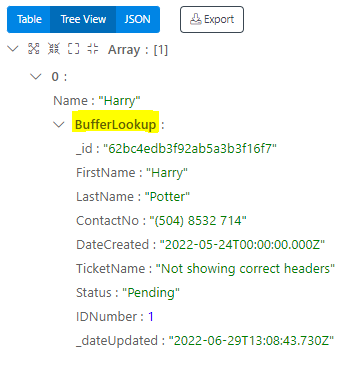